A trio of adventurers

This trio of adventurers are prepared to delve into the wilds of Xen’drik and perform acts of dubious heroism as long as the money’s right.

The three are usually accompanied by a small group of hirelings and henchmen of various stripes. 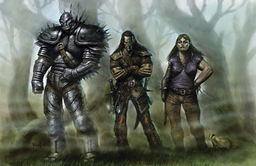