An orphan who explores the Rubble Warren with other children

Caradoc is the leader and ‘protector’ (his term) of a group of street children in the Saltire ward of the Cross district. Armed with a wooden sword and shield, he looks after the other members of his urchin gang as they explore the Rubble Warren. He dreams of becoming a stalwart adventurer and hero.

Caradoc assisted the adventurers when they were looking for the entrance to the White Oubliette in the Rubble Warren. He was very taken with the heroic stature of several of them.

After the collapse of the Oubliette, the Storm Hammers left the Rubble Warren, but Caradoc and his charges still remain. 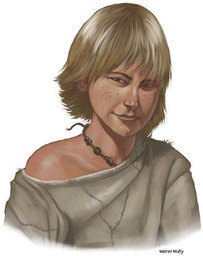