This gruesome helmet was discovered by Xen’drik explorers who sold it to Valexa Von Ruthvek. It appears to be of elven make and has an aura of necromantic magic.

The Shrouds attempted to take it from Valexa but were foiled by the adventurers. Valexa passed it along to them, hoping they could learn its secrets (and that the Shrouds would not come to her store again). 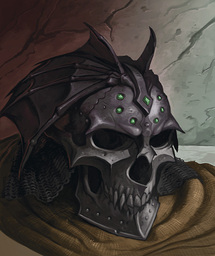