A mysterious Aundarian adventurer working for an unknown organisation

Tyrnan Thiel helped Spark get away from the group attempting to capture him, led him to the Brass Minaret above the Summerfield district and opened a magic portal to bring Ballast and Shinra through to Stormreach. When threatened and harassed by Ballast, Tyrnan fled.

Tyrnan has a distinct Aundarian accent and seems to be a skilled rogue and trickster with some knowledge of magic. He works in the service of an unknown organisation who sent him to rescue and aid the warforged.

Caleb has since discovered that Tyrnan Thiel seems to be allied with the Ninth Wands. 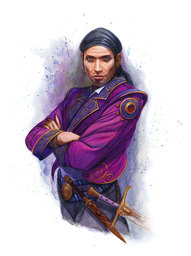