Hard as iron yet graceful as a crane, Sláine came to Stormreach with her mentor to find a challenge worthy of their mettle. She's lost her master, but found new purpose.

Sláine is in her mid twenties, wiry and fast but deceptively tough. Her years of monk training have not eliminated her fiery passion, but have allowed her to tame and direct it. She is a questioner, always seeking clarification and pushing others to make enlightened decisions, though she is the first to admit that introspection and intellectual pursuits are not her strong suit.

The destructive tendencies of her youth are now funelled into battle, and Sláine is rarely angry. Instead she is open, friendly, often oddly childlike in her demeanour. Like all survivors of the Mourning, however, she has been deeply scarred by the loss of her homeland, and is quick to defend its memory – and to destroy anyone or anything that smells of the Mourning’s taint.

Sláine came to Stormreach with her mentor, Áedan, as two of the last practitioners of the Way of the Iron Soul. Their tradition teaches that they must continually test themselves against hardship, striving to maintain inner peace despite physical conflict – and where better to find such hardship than Xen’drik? Áedan’s best days are behind him after he was wounded during a journey into the Mournland, and he sends Sláine out as his agent in Stormreach.

Though she openly prefers the martial aspects of her calling, Sláine still seeks wisdom, and possesses it in a greater degree than her lack of book learning would suggest. The Iron Soul monks seek answers, but in post-war Eberron there is only one mystery Sláine considers worth uncovering: that of the Mourning. She is more willing than her master to accept that it is an unsolvable riddle, however, and in her darker moments she does worry about Áedan’s obsession.

The investigation of Alarich’s death has put Sláine in contact with his former companions, and she has relished the chance for action, to be proactive about searching for clues into the Mourning. While most of their time has been spent looking into the Liondrake’s Roar, the revelation that they were supplying Living Spells to the Storm Hammers – themselves led by sorcerers who seem to channel the same Mist that now covers the Mournlands – has brought her buried anger to the fore. Of her companions, she most respects Kaddik, whose search for his missing mentor is something she can readily understand. She also respects Caleb’s skill and discipline, though is yet to trust him. Rufus has so far failed to make much of an impression, though she finds less annoying than others do. Of the warforged, Spark unsettles her, and she finds Ballast offensive – most likely because his brash, aggressive behaviour reminds her of her younger, undisciplined self. She has also found affinity with Janda-Shen, who like herself has been forced to leave behind a homeland with little chance of being able to return. 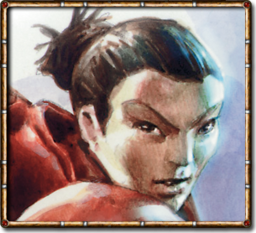