Leader of the gang called the Storm Hammers

A human woman with a shock of black and green hair

So far, little is known about the woman named Miraan, except that she is apparently the leader of the gang / terrorist group called the Storm Hammers. She entered into an agreement with Taryn’aashta to trade dragonshards for fell taints, but may not have been keeping up her side of the bargain.

When the adventurers discovered the White Oubliette, Miraan and some of her followers were there, using the Key of Eleven to summon demons from the Abyss. She escaped by turning into a green mist and flowing through a rubble-choked passageway to the surface, not long before the ancient giant redoubt under Stormreach collapsed.

Little was been heard from her, or the Storm Hammers, for some time after that event. Then the Storm Hammers resurfaced to launch an escalating series of attacks upon Stormreach, including unleashing the Scourge of Thought and its telepathic infection upon the city. After that, Miraan appeared in a dream to Slaine to tell her that the fell taints now controlled the Storm Hammers and were bent on turning Stormreach – and all Eberron – into unending chaos and madness.

Miraan can channel the supernatural power of the Mourning in a number of ways, including turning into a poisonous mist and creating daggers of necrotic energy. 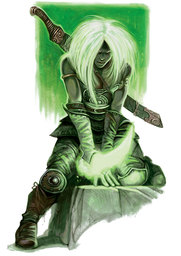