A half-orc prospector and tracker from House Tharashk

Marik’aashta is a minor scion of House Tharashk who works on prospecting new dragonshard sites in the Shadow Marches. Kaddik has been in his employ for several years as a guide of the Marches and operator within the port city of Zarash’ak.

When Marik vanished on a trip to Stormreach, Kaddik followed to find his mentor, and uncovered a conspiracy involving the Liondrake’s Roar and Marik’s cousin Taryn’aashta, who kidnapped him to prevent him bringing things to light.

Marik was being held captive in Zantashk, a mining outpost far from Stormreach. Kaddik and his comrades rescued him and brought him back to Stormreach, where Marik revealed that he and Kaddik are in fact spies in the service of the Tusks, House Tharashk’s secret intelligence group. 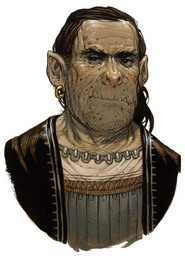