A well-dressed middle-aged human man with an authoritative bearing

Kurn d’Velderan is the Viceroy of House Tharashk in Stormreach, and in charge of all the House’s operations in Xen’drik. He manages numerous mining camps and monitors activities within the city, which includes navigating diplomatic tightropes between the Storm Lords, dragonmarked houses and other forces.

A recent priority has been to strengthen the presence in Stormreach of the Liondrake’s Roar, the division of the House that recruits mercenaries and laborers from the monstrous races. Faced with pressure from his superiors to focus on the Liondrake’s Roar, Kurn appointed Taryn’aashta to take over operations of the mercenary group. Under Taryn’s watch, House Tharashk has started to develop ties with the hill giants and goliaths; to date, the drow have shown no interest in working with the house.

While nominally Kurn’s deputy, Taryn’aashta’s success improved his political position within the House, to the point where the Viceroy found it difficult to question his actions. When rumours of Taryn’aashta’s illegal activities came to light, Kurn had to go outside the House and hire Kaddik and his fellow adventurers to find evidence and bring Taryn to justice.

Kurn is a decent man, but his first loyalty is to House Tharashk and his responsibilities as Viceroy. 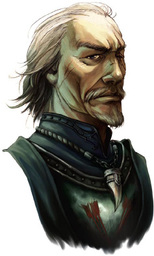