Owner of the Black Wrack tavern

A middle-aged, but powerful and healthy, human man, dressed in working leathers

Handlon the Brick (just Brick to his friends and regular customers) is the owner and operator of the Black Wrack, Stormreach’s largest and perhaps most popular tavern.

While having lived in Stormreach for close to 20 years, Handlon still has an Eldeen Reaches accent, and his habits are those of an experienced woodsman and forester. He’s been known to occasionally assist expeditions into the jungles near Stormreach, although not for several years.

Handlon is accompanied at almost all times by an enormous mastiff, which spends most of its time either sprawled out on the floor by the bar or tracing a lazy perimeter around the tavern’s interior. Its name is Sascha, and no matter how drunk or rowdy the Wrack’s patrons get, they know not to involve the dog in their shenanigans, lest they rouse the animal’s ire or that of its owner.

The Black Wrack was recently burned down in an abortive attack upon the adventurers by the Liondrake’s Roar. Handlon was unhurt (as was Sascha), but his livelihood has been destroyed, and it remains to be seen what he will do next. 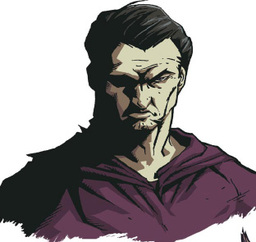