Overseer of the House Tharashk Refinery

The orc Durgran’Torrn is the overseer of the House Tharashk Refinery, and one of Viceroy Kurn d’Valderan’s two deputies in the operations of House business in Stormreach.

Durgran is a down-to-earth character whose good humor is almost as boundless as his strength. As well as being a capable administrator, he is a gifted warrior who deals with any troubles or brawls
at the Refinery. He has the respect of the workers, and has even represented the House in the Red Ring on occasion.

When rumours of illegal activities in the Liondrake’s Roar came to light, Durgran persuaded Kurn to listen to the stories of Kaddik and his fellow adventurers. He has acted as an intermediary between the House and the adventurers, and seems willing to do what he can to help find Marik and stop the activities of the Storm Hammers.

Durgran’Torrn has dropped a couple of subtle hints that suggest he may be a follower of the orcish druidic religion. 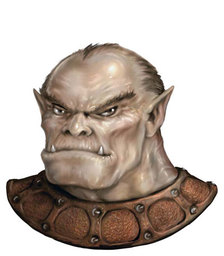