An archetypal Karrnathi, Alarich was loyal, fearless, and formal. He left for Xen'drik looking for "opportunity", and didn't talk about his past. He never made it to Stormreach.

Alarich was Karrnathi through and through: reserved, formal, loyal and fearless. His bearing and personality gave away his noble heritage, but he didn’t talk about it – or his reasons for leaving his country and family behind. He spent the last few years of his life travelling across Khorvaire, occasionally working as an adventurer for hire to fund his travels, but he never stayed in one place long enough to gain a reputation.

Alarich may have left Karrnath, but Karrnath never left him. A loyal citizen, he served in the military in the last years of the war, and reacted to slurs against Karrnath as though they were against his own mother. He refused to take any employment which would act against his country’s interests.

Like most Karrnathi nobles, Alarich was well schooled in the art of combat. He was unusual in that he emphasised mobility, speed and precision over strength: rather than smashing through armour, he studied his enemies for weaknesses then sprinted across the battlefield to strike with devastating effect. He took the same approach to getting into enemy fortresses, using skills he picked up on his subsequent travels through Khorvaire.

Aboard the Kraken’s Keepsake, Alarich largely kept to himself, but enjoyed speaking to Annaka Soranath and her children – coming from eastern Karrnath, he speaks fluent dwarven, and respects dwarven traditions. He noted the arrogance and also business acumen of Tesh Vidrad, showing an interest in the path of the “thunder guide”, and also noticed the strength and martial prowess of Ballast, though he disapproved of his agressiveness. Alarich avoided the captain, and though he met and liked young Neal d’Cannith, seemed to distance himself from the boy a little. He saw potential in forming an adventuring party with both of them, as well as the Warforged warlock Spark and the seemingly vapid elf woman Leeloo, when they banded together to save the crew and passengers following the ship’s crash.

After several adventures on the island, Alarich and his new companions went to fetch replacement parts for the Kraken’s Keepsake – and while they were away, the crew and passengers were captured by the corrupted snake-men of the island. The group went to their aid, following them to a magical lighthouse from the days of the giant empire, where the foul cultists created monsters using an unholy, fleshy device – including a giant tainted beast formed from Vidrad’s riding lizard. Alarich managed to kill the beast, but the cultist’s leader – a changeling masquerading as Captain Ivello – harnessed mighty poisonous magic and struck Alarich down shortly before the battle was won.

His body was brought to Stormreach for burial by his companions. His travel papers gave his full name, and Ballast discovered his secret while examining his corpse: he hid a dragonmark beneath his leather armour. Ballast also took a pendant worn by Alarich; it doesn’t seem magical or valuable, but it does bear a symbol Ballast didn’t recognise.

The monk Áedan showed interest in his death, pondering whether the corrupting magical poison that destroyed him had any connection to the mystery of the Mourning. When he went to examine the body, however, he came upon a group of men carrying it off, who injured him badly. The sigil worn by the men revealed they were members of the Order of the Emerald Claw, but for many months no-one – not even Rufus van Pelt, who was hired to investigate the theft – could discover where they took Alarich’s body. Worse, the adventurers discovered that Alarich’s body is intended to be the vessel for the Impure Prince: a mighty undead warrior whose rise is foretold in the Draconic Prophecy. Another prophecy adds that either he become this dire figure, his soul destroyed – or he will rise again as himself, and restart the war in Khorvaire. It seems that even in death, Alarich cannot escape destiny.

After many adventures, the party once led by his friends find The Shrouds, the death cultists hired by the Claw to raise him as the Impure Prince. They successfully kill their leader and interrupt the ritual, then take his body back to Stormreach, where they decide to resurrect him. The ritual to do so requires they travel into Dolurrh, realm of the dead, to find his soul, which they do. Alarich, alongside Jin, has been locked in endless battle with the shades of the snake cultists who killed him. Wary of the prophecy, he needed a bit of convincing, but eventually agreed to return to the mortal realm. When the forces of death revealed that a soul must be left behind to pay for his return, and Spark volunteered, Alarich promised to return for him if there was a way.

Now, with all the major threats to Stormreach over, and the adventuring party going its separate ways, Alarich worries more than ever about being caught in the web of fate. But in the meantime, there are adventures to be had… 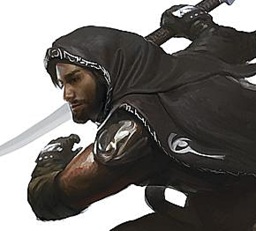